The details in these pages are for informative purposes only. If you wish to attempt any of these projects yourself, you do so at your own risk. Whilst these pages provide information as to how I carried out the various projects (on my 2002 Model Year Petrol RHD X-Type) the same may not always be applicable to your vehicle.

If attempting to carry out any of the retrofits on my site, please remember that you do so at your own risk. Please ensure you know what you are doing as this is not a support site. The information is only provided from my own personal experience. If you require any advice concerning upgrades, or anything else Jaguar related, then www.jaguarforum.com is a great place to go. 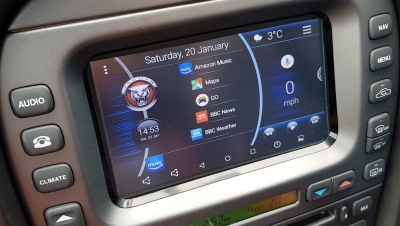 This is arguably the single most impressive upgrade you can give your X-Type (or S-Type, XJ X350/X358). The brain child of Ben Willcox, this is an incredible feat of ingenuity starting out in 2016 and perfected over time. The original Jaguar touchscreen/navigation system was developed in the late 1990s and launched in the X-Type in 2001, with an options list price of £2315. It was cutting edge technology back then. With JagDroid and the clever use of Arduino microcontrollers, in the touchscreen and CD/radio units, and an Odroid-C2 or N2 single-board computer it becomes cutting edge yet again. Ben has been able to decode the button matrix, and integrate a new touchpanel offering a brighter and higher resolution display (which will even dim when you turn your headlamps on), whilst maintaining the original infrared touch controls used by the original Jaguar system. This enables the old and the new to co-exist and function seamlessly. 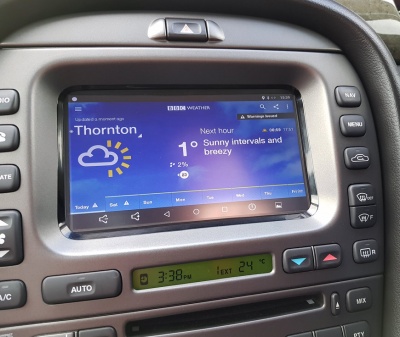 BBC Weather on a Jaguar Touchscreen!

BBC Weather on a Jaguar Touchscreen!

Once fitted, the JagDroid unit retains all the existing Jaguar functions: Climate Control, Phone, Audio, Jaguar Navigation, etc. But it then takes your in-car entertainment into the 21st Century with the Android operating system, multi-touch screen, GPS, Bluetooth audio streaming, 'OK Google' voice control, download apps from the Google Play store (including Google Maps, TomTom Go, Spotify, Amazon Music, BBC News/Weather, YouTube, etc) and fit reverse and front cameras. You can play music from a USB memory stick, from a microSD card, streamed over Bluetooth from your Android or iOS phone, or streamed over wifi from Amazon Music or Spotify. You can still play music via the original CD player, or CD Changer or ACM (where fitted). 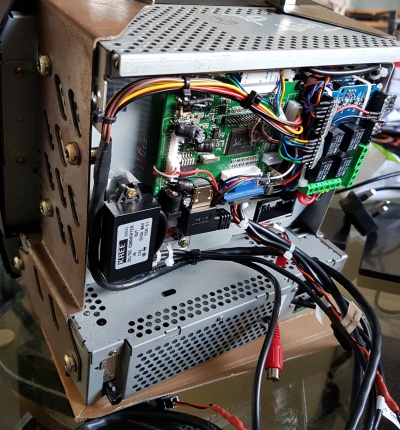 The electronics behind the magic. Touchscreens which were originally TV-enabled have their new electronics exposed, non-TV units are fully enclosed.

The electronics behind the magic. Touchscreens which were originally TV-enabled have their new electronics exposed, non-TV units are fully enclosed.

The system includes full integration with the standard audio controls, including track skip on the steering wheel and on the CD player. If you are playing music on Android, the controls will skip tracks on Android. If you are listening to a CD, the controls skip CD tracks as they always used to.

The JagDroid system interfaces fully with the touchscreen and CD/Radio controls, and requires no additional buttons or switches to be fitted. For example, if you press AUDIO, TEL, CLIMATE or MENU buttons then the screen will display the original Jaguar screens for the function. Want to go back to the superior world of JagDroid? Press the NAV button and you're there. Want to relive the 'joys' of the original Jaguar Navigation System? No problem, press the NAV button for 2 seconds and you have it. 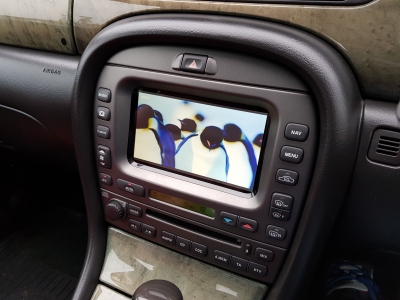 Switching between audio sources is also straight forward. The JagDroid unit outputs audio through your CD players 'CD' source, but that doesn't mean you can no longer use your CD player. Want to play a CD instead? Just press the CD button for 2 seconds and it switches between CD Player or JagDroid audio. CDC Changer/ACM, and AM/FM radio playback remains unchanged.

You can even add DAB digital radio by plugging in an inexpensive DAB+ USB dongle and aerial and installing a DAB+ Player app.

If you don't currently have a front heated windscreen but like the idea of having a front camera, or a spare composite video input, that isn't a problem. You can replace your existing touchscreen for one with the FRONT HEAT button, your X-Type won't object. 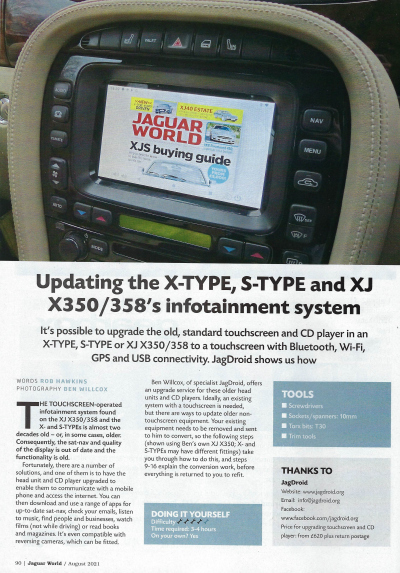 For more information: The Jaguar Android Upgrade Project - How To

And to help you customise your JagDroid system - check out our original JagDroid Boot Logos and Animations.

JagDroid was featured in a 4-page spread in the August 2021 edition of Jaguar World magazine.